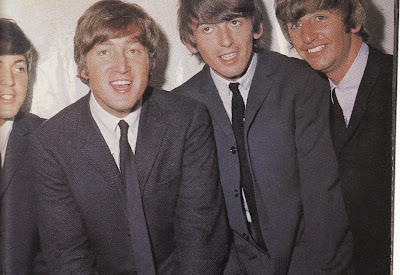 After seven months of nonstop activity, The Beatles were grateful to have most of May, 1964 free for vacations. Paul and Ringo took their girlfriends Jane and Maureen to the Virgin Islands. George and John flew with Cynthia and Pattie to Honolulu and then Tahiti, returning through Los Angeles.
On May 30th, the group reconvened in London, where they met the press at the Soho offices of NEMS Enterprises. Lengthy recordings of the event have survived from broadcasts on KYW-AM, Cleveland (recorded by Jim Stagg) and WBZ-AM, Boston.
Posted by DinsdaleP at 1:29 PM