What Your Loving Man Can Do 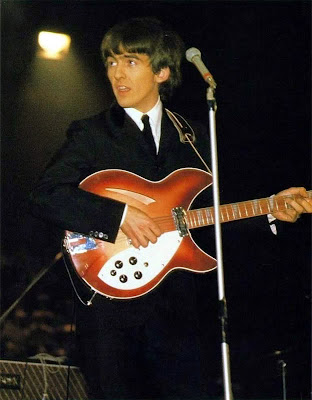 April, 1964 finished up at a furious pace for The Beatles, as they finished filming A Hard Day's Night. The 23rd was spent filming at Thornbury Playing Fields, with John taking the afternoon off to attend a literary luncheon, and all four rehearsing for Around The Beatles that evening, all these events being covered by visiting US disc jockey Murray The "K".
Filming wrapped on the 24th with a final location shoot and a cast party, and Around The Beatles rehearsals continued on the 25th. Murray Kaufman was in London to participate in the TV special and to introduce the group at the NME Pollwinners' concert on the 26th at the Empire Pool, Wembley.
Another American DJ visiting England, thanks to the hospitality of George Harrison's sister Louise, was Gene Loving of WGH-AM, Tidewater, Virginia. On the evening of the 25th, he interviewed George in a London hotel, and found himself backstage in Wembley the next afternoon, where he spoke with the other three Beatles and Louise Harrison. George also taped a short promo for Gene's show.
Gene Loving then traveled with Louise to Liverpool, where he recorded interviews with George's parents, Harold and Louise, and Cavern Club doorman Paddy Delaney.
Posted by DinsdaleP at 3:02 PM