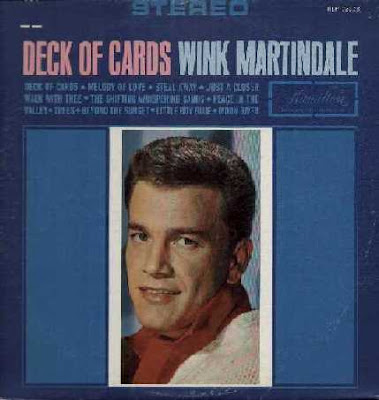 After touring the UK, France, and US in a four-month period, followed by two months spent filming A Hard Day's Night, The Beatles took the month of May 1964 off. Paul and Ringo headed for the Virgin Islands with their girlfriends Jane Asher and Maureen Cox.
John and his wife Cynthia accompanied George and Pattie to Hawaii, en route to Tahiti. As they departed Honolulu Airport on May 5th, George expressed his displeasure at the intrusions of the American press during their brief stay:
Honolulu Airport
Three weeks of sun, surf, and sand in Tahiti seemed to lift his spirits. When he and John connected through Los Angeles on the way back home May 25th, they were in a silly mood as they recorded greetings for radio station KFWB-AM and their DJs Joe Yocum and Wink Martindale. John recognized Wink's name from his hit single "Deck Of Cards", which he parodied as "Deck Of Dubs":
KFWBeatles
This brief recording was pressed onto a souvenir single sold at a Los Angeles-area music store in June, with "You Can't Do That" on the B-side.
Posted by DinsdaleP at 10:51 AM