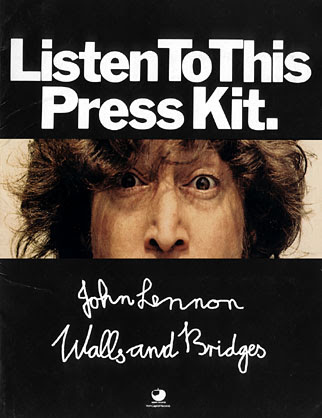 After appearing in local markets from California to Texas to Canada, John Lennon finally appeared live on his hometown radio. Late in the afternoon of September 28th, 1974, he showed up at WNEW-FM's studio for a surprise appearance during Dennis Elsas's Saturday shift.

The tape has been rebroadcast with some regularity over the years, and most of it was included in the Lost Lennon Tapes radio series; here is the complete broadcast (minus commercials):

Walls And Bridges was officially released in the US on September 30th, trailed by an extensive promotional campaign consisting of radio and TV ads, buttons, billboards, posters, matchbook covers, T-shirts, bumper stickers, and more, all labeled "Listen To This [X]":

Posted by DinsdaleP at 3:01 PM