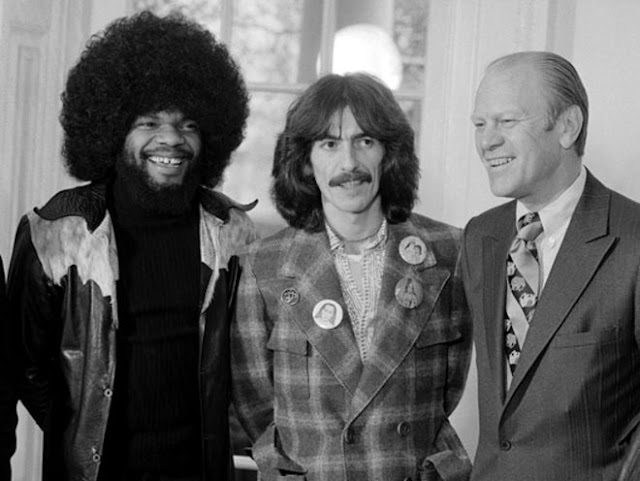 George's 1974 tour continued to slide downhill as it trudged from city to city. Things went okay in Baton Rouge on November 26th, in Memphis the following night, and Atlanta the night afterwards:

The problems began after two shows in Chicago on the 30th:


Following the evening performance, Ravi collapsed backstage and was taken to the emergency room with a suspected heart ailment. It turned out to be severe indigestion brought on by stress, and he would miss the rest of the shows until December 19th in New York City.

The rest of the band carried on, but the next scheduled shows in Cleveland on December 2nd had to be cancelled due to a snowstorm. The tour continued north, hitting Detroit, Toronto, and Montreal by December 9th, when the Dark Horse LP was finally released in the US. Boston and Providence followed, and December 13th found George and company in Landover, Maryland.

At the Salt Lake City stop back in November, George had met with Jack Ford, son of US president Gerald Ford. Jack invited George to visit the White House during their Maryland visit, so prior to their matinee show on the 13th, George, Ravi, Tom Scott, Billy Preston, George's father Harold, and his budding sweetheart Olivia Arias congregated in Washington to meet the Prez:


After that peculiar summit, it was back to the Capital Centre for two more shows. At the tour's conclusion, Jack Sheridan of Baltimore station WCAO aired this hatchet job on the concert (and George in general), which was sadly representative of the mainstream rock press's feelings.

Posted by DinsdaleP at 2:24 PM