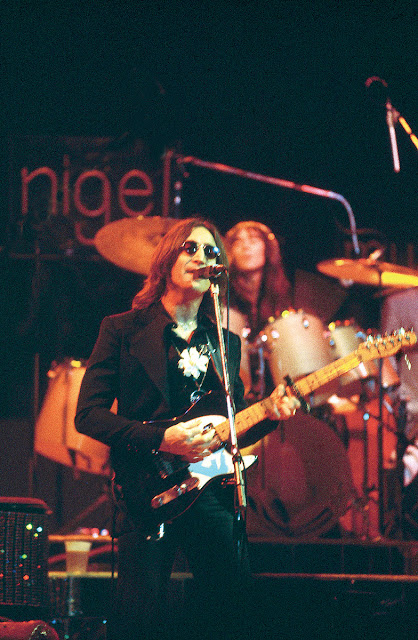 All the events of 1974 in John Lennon's life came to a head on Thanksgiving night, November 28th, at Madison Square Garden. To backtrack a bit, when Elton John had participated on "Whatever Gets You Thru The Night" back in July, he had semi-jokingly extracted a promise from John that if the song hit #1, the two would perform it together at one of Elton's concerts.

Unlikely as it seemed (John hadn't reached the top 10 since "Imagine" three years prior), the single did indeed top Billboard's chart for the week ending November 16th. John agreed to fulfill his end of the deal, so he and Elton's band met up at the Record Plant a couple of days before the gig to choose and rehearse the numbers for John's appearance:

Things were changing in John's private life as well. He and May had been going through some rough times, exacerbated by John's November 5th assignation with another female companion at the Bottom Line following a Jerry Garcia show. After a photo of the couple was published in Cashbox, May was understandably outraged, and John ended up spending the night of November 16th back at the Dakota (sleeping in the living room while Yoko participated in an Arts Festival at Shea Stadium).

So John was understandably on tenterhooks the night of November 28th, knowing that Yoko had a ticket to the Elton show, that May would also be there, and that he had never performed (albeit as a guest) without his own band or at least Yoko before.

Towards the end of the show, Elton paused to make the dramatic introduction; a buzz was already in the building as rumors of John's attendance and sightings of May and Yoko made their way through the crowd, which absolutely exploded when John strolled onstage, guitar in hand:


John's mini-set was short but memorable, playing guitar and singing on "Whatever Gets You Thru The Night", "Lucy In The Sky With Diamonds" (Elton's new single, also headed for #1), and a song usually associated by his "estranged fiancee", "I Saw Her Standing There". John also returned for the encore, "The Bitch Is Back", to shake a tambourine.

As legend has it, John and Yoko decided to reunite after meeting backstage following the concert. In reality, the wheels had been in motion for their reconciliation for a long time, and it wasn't until 1975 that John finally returned to the Dakota for good. Thanksgiving 1974 should really be remembered as the last night of John Lennon's live performing career, and it's gratifying to observe that he went out on a high note.

Posted by DinsdaleP at 2:41 PM