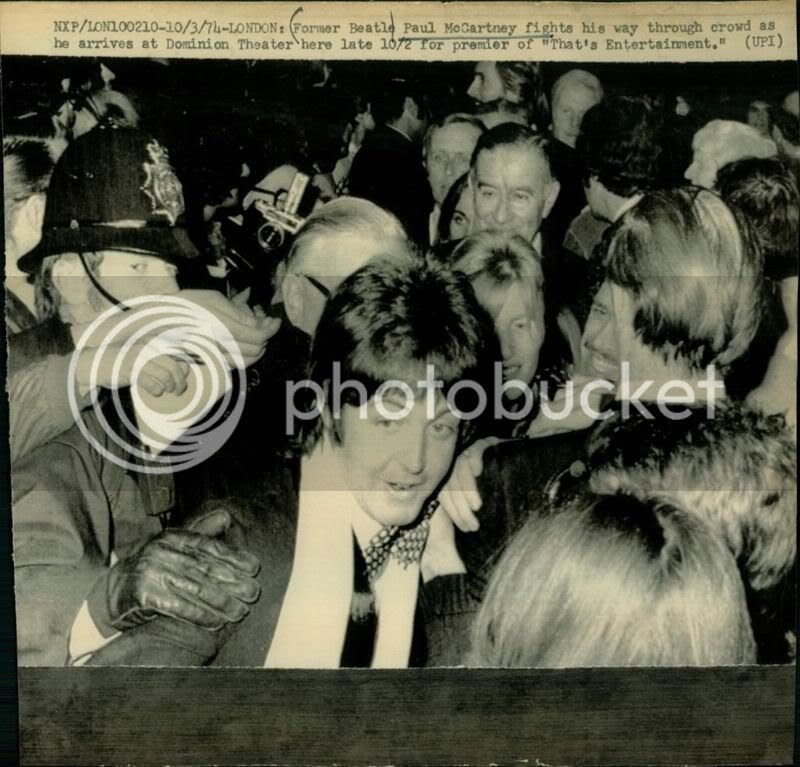 Believe it or not, John Lennon wasn't the only ex-Beatle doing things in the early autumn of 1974.

Two songs from Paul McCartney and Wings' Nashville sessions were released as singles in October. "Walking In The Park With Eloise", credited to the Country Hams, came out October 18th in the UK (on EMI, not Apple) and unsurprisingly failed to chart anywhere. "Junior's Farm", backed with "Sally G", fared much better. It went on sale October 25th in the UK (where it peaked at #16), and November 4th in the US, which took the A-side to #3 and then found the B-side creep into the top 40 when it was promoted as a country crossover.

Ringo had spent most of the summer recording Goodnight Vienna, which received final overdubs and mixes in September and October. He also worked on a live action/animated film with Harry Nilsson, Ringo And Harry's Night Out; it was never completed, but brief glimpses were seen in the documentary Who Is Harry Nilsson?

Inspired by Dark Horse, Ringo was in the process of starting his own label, Ring O'Records. Its first signing was David Hentschel, who had been an engineer at Trident Studios (working on All Things Must Pass and Red Rose Speedway) before branching out into music. He played synthesizer on numerous albums, and Ringo commissioned him to record a synth-based remake of the Ringo LP (akin to Paul's Thrillington remake of Ram). This odd project was taped during September 1974 at the home studio Ringo had installed in Tittenhurst after buying it from John. Startling Studio provided the LP's name (Sta*rtling Music), and Ringo reprised his role of finger clicks on the cover of "Step Lightly". Phil Collins played drums on several of the songs:

George was running himself and his throat ragged recording the Dark Horse LP, working with Ravi Shankar, and rehearsing his own band for a US tour, the first by an ex-Beatle. At some point, he sat down by a roaring fire at his Friar Park home with DJ Alan Freeman and recorded a lengthy interview for syndication on the US series Rock Around The World.

The exact recording date is uncertain, as the show was apparently first aired in October 1975 to promote Extra Texture. But there is no mention of that album, and George plays solo acoustic renditions of both sides of the first US single from the 1974 LP ("Dark Horse" and "I Don't Care Anymore"). He also drops in brief performances of "Awaiting On You All" and "Far East Man" in response to Freeman's questions.

Most of George's replies early in the conversation ("force-grown rhubarbs in a hothouse", "if there's a God, we must see Him", "Ravi's the only person I met who impressed me") will be familiar to interview collectors, but as time passes, George opens up about his inspirations ("One Meatball", Buddy Holly, "Heartbreak Hotel"), calls Beatles songs "80% overrated" but explains how they revolutionized studio recording, touches on his recent separation from Pattie, and in one breath claims that Paul "ruined" him as a guitarist, and in the next talks of how he and Paul have recently begun to reconnect as friends and enthuses about doing the same with John as soon as possible.

Speaking of John, he had one last bit of promotion to do for Walls And Bridges, namely shooting a promo clip for "Whatever Gets You Thru The Night", which was rapidly climbing the US charts, to be shown on Top Of The Pops. On October 17th, John and a BBC film crew wandered around New York filming John's interactions with fans and kids in Central Park.

Thirty years later, the raw footage was re-edited to create a video for the 1973 song "Mind Games":

Posted by DinsdaleP at 3:18 PM