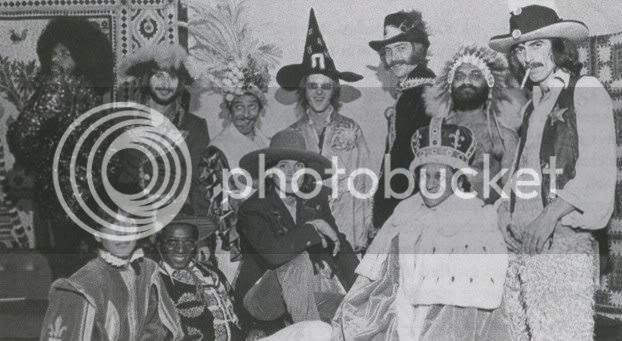 George Harrison's 1974 North American tour kicked off November 2nd in Vancouver, Canada. Fans' expectations were through the roof, with the Concert for Bangla Desh setting a high bar, never mind the ex-Beatle mystique and reunion rumors which dogged George at every stop on the tour.

The setlist began with a new instrumental, "Hari's On Tour (Express)", from the Dark Horse LP, which nobody in the audience had heard yet. The one-two punch of "While My Guitar Gently Weeps" and "Something" followed, but any thrill of hearing George sing these Beatles numbers was dampened by the state of his voice, and the lyrical changes he insisted upon ("while my guitar tries to smile", "something's in the way, remove it!"). Worse was to come with a dirge-like "In My Life" ("I love God more") and two unfamiliar songs from Living In The Material World which George was smart enough to drop from the setlist after the first night.

A lengthy set from Ravi Shankar and Friends occupied the last half of Act 1, and while the performances were top-notch, with participation from Tom Scott and the rest of George's backing band, 30 solid minutes of Indian music tried the patience of many audience members. The unquestioned highlights of the tour were Billy Preston's solo numbers, which brought the crowd to its feet each night.

The tour moved on to Seattle, San Francisco, Oakland, and Long Beach, before reaching Los Angeles on November 11th and 12th for three shows at the Forum. Reporter Ben Fong-Torres interviewed a rather testy George backstage on the 12th for the Rolling Stone News Service radio series. Fong-Torres tried to challenge George about meeting the audience's expectations, but he deflected all criticism by either claiming it was in God's hands, or telling disappointed fans to go see Wings instead.

From there, it was on to Tucson, Salt Lake City, Denver, St. Louis, and Tulsa, where friend and Bangla Desh cohort Leon Russell made a special guest appearance on November 21st:


The "Dark Horse" single finally came out in the US on November 18th, peaking at #15 on Billboard's top 40. On the 24th, George played two shows at the Hofheinz Pavilion in Houston. The following night (actually closer to 1AM on the 26th), he made a surprise appearance on local station KLOL-FM, sitting in on Levi Booker's overnight shift. He seemed to be in much better spirits, chatting freely about finances, meeting John & Paul, Sgt. Pilcher's arrest, the concept of happiness, Ravi, Monty Python, and Lord Buckley, as well as playing a rough mix of "Maya Love" from the (still-unreleased) Dark Horse LP.

PS - Thanks to TFM for uploading a substantially more complete recording of George's October 23rd L.A. press conference. It can be downloaded here.

Posted by DinsdaleP at 3:58 PM