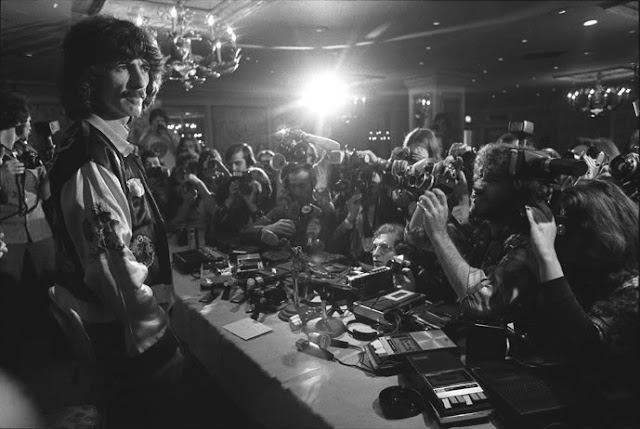 With Walls And Bridges now finally in his rear-view mirror, John could focus on completing his oldies album. Having realized that only a few of the songs taped with Phil Spector were salvageable, he reenlisted the Walls studio band to record the rest of the tracks.

The musicians spent October 18th and 19th rehearsing the material at a farm in upstate New York owned by music publisher Morris Levy. Levy's company, Big Seven, owned the rights to Chuck Berry's "You Can't Catch Me", a lyric from which Lennon had appropriated in "Come Together". As part of an agreement with Levy, John agreed to record some songs from the Big Seven catalog in his oldies project.

In exchange, Levy loaned the band use of his dairy in Ghent for the rehearsals, which were recorded. Among the numbers tried out were several that didn't make the final cut, including "Thirty Days", "C'mon Everybody", and "That'll Be The Day":

The band made quick work of the sessions at the Record Plant in New York, completing the basic tracks for the rest of the album in five days of sessions from October 21st through the 25th. Overdubbing and remixing continued through November.

On the other side of the country, George was rehearsing his own band for the Dark Horse tour, scheduled to begin November 2nd in Vancouver. George officially launched the tour during a press conference October 23rd at the Beverly Wiltshire Hotel in Los Angeles. His comments about "going back in his cave for another five years" foreshadowed the troubles ahead.

The truth was that George had been simultaneously rehearsing on a soundstage at Hollywood's A&M Studios and still recording the Dark Horse LP throughout October, with sessions running as late as the 31st. The result was an album and tour marred by George's croaky, raspy vocals, as heard in this promo clip for "Dark Horse" filmed during rehearsals: