You Ottawa Been There 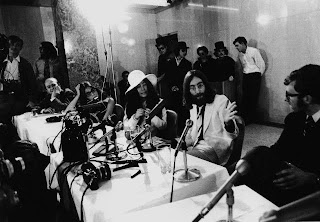 Published in The Ottawa Journal, Wednesday, June 4, 1969
By David Yates

Dressed in all-white suits, Beatle John Lennon and his wife Yoko Ono brought their crusade for peace to Ottawa Tuesday and urged their followers to sell it like merchandise -- by using advertising.

"You must plug peace and make it known as an alternative to war," Mr. Lennon told a select group of 50 students and reporters at a University of Ottawa seminar sponsored by the students union.

The Lennons and daughter Kyoko arrived in Ottawa late in the afternoon after a drive from Montreal where the couple had just finished a week-long bed-in campaigning for peace from a hotel suite.

They were due to appear on the lawn of the university's administration building at 4 p.m., but that was put back to 4:30 and just before then an announcement was made to several hundred waiting youngsters that the Lennons would not be making the scene until 6:30 p.m. because of "a mechanical breakdown."

But the Lennons feinted them right out of their shoes and arrived at the arts building at 5 p.m.

Youngsters were left standing in the rain until the Lennons made a brief appearance at 7 p.m. outside the administration building.

The couple have been trying to avoid the younger crowds during their stay in Canada to speak to the news media and reach as many people as possible, it has been explained.

During the panel discussion and press conference which followed John and Yoko lashed radicals who love peace and refuse to try to convince the "squares."

"They (the radicals) are just snobs," said John and Yoko at different times.

"Use the system and don't be snobs about peace," John declared.

As examples, he said he and American comedian and civil rights activist Dick Gregory have been able to infiltrate the system, make money and spread their messages.

"They (people who run the system) are more greedy than they are prejudiced," he said.

In other comments John declared "cops are human" and "all prime ministers compromise their principles to get where they are -- even the best."

John had hoped to meet Prime Minister Trudeau during his stay in Canada, but the prime minister's office said he was too busy to meet the Beatle.

Here's a recording of John and Yoko at the Ottawa Peace Conference.