The Worst Beatles LP Ever 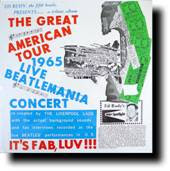 Ah, Ed Rudy. If he was the Fifth Beatle, I am the Fifth Rutle.
The nadir of his cash-in albums was also the last. After two decent interview/press conference LPs (and one featuring the Stones) came the masterpiece pictured above, in 1965.
Probably released around August to cash in on the US tour, it contained a genuine Beatles concert recording, from Atlantic City, August 30th, 1964!
As you'll hear, it was an audience recording, but it was complete - and otherwise unbootlegged!
Oh yeah, the music was a little distant and hard to hear beneath the screams, so Ed hired a group called The Liverpool Lads to sweeten up the recordings. But you can tell the Lads were intimately familiar with the material, and enthusiastic about being in the studio!
Well, perhaps not, but to make up for that, Ed threw in a lengthy revealing conversation with a famous British manager of a pop group talking about the travails of dealing with hotels, fans, and the press!
OK, so it's not Brian Epstein (I have no idea if it's supposed to be someone imitating him or just the Liverpool Lads' unfortunate representative). But who cares? This album only costs a couple of bucks!
What's that you say? It only sold about 70 copies in 1965 and most of those were destroyed by incensed consumers after hearing the first 2 minutes, and now it's so rare, it'll cost a couple of hundred dollars IF you can find it?
Fear not.... or actually, if you plan to play these files, be VERY afraid. Without further ado:
The Great American Tour 1965 Live Beatlemania Concert, side A
The Great American Tour 1965 Live Beatlemania Concert, side B
Posted by DinsdaleP at 9:06 PM