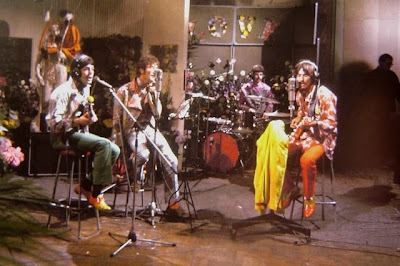 On June 25th, 1967, The Beatles represented Great Britain and recorded their new single, "All You Need Is Love", live in front of a potential 400 million viewers.
The broadcast, entitled Our World, was seen in 31 countries. Here's some of CBC's coverage as seen in Canada.
The Beatles' performance sounded like this in Japan.
And it looked like this:
Here's the original outro to The Beatles' segment.
And finally, the studio recording of the mono feed to the BBC's mobile van, with extra material after the cameras had switched off.
Posted by DinsdaleP at 9:06 PM