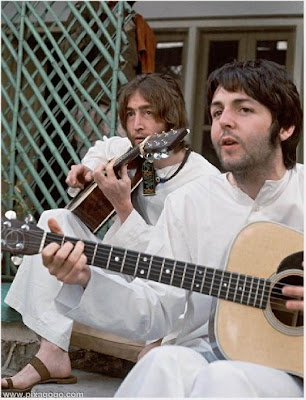 Before heading off to India, the Beatles spent a few days in early February, 1968 at EMI Abbey Road recording tracks for a stopgap single to be released during their absence. In the midst of the sessions, Ringo appeared live on Cilla Black's new TV series. "Lady Madonna" and "The Inner Light" ended up on the single, while John's "Across The Universe" was donated to a (much-delayed) charity LP, and his "Hey Bulldog" was slated for Yellow Submarine:
John and George flew to Rishikesh on February 15th, and Paul and Ringo followed three days later. ITV News interviewed Maharishi Mahesh Yogi at the outset of the group's pilgrimage to his his ashram.
Ringo and Maureen lasted only ten days, while Paul and Jane returned home on March 26th. At London Airport, Paul explained to the BBC's Richard Whitmore and another interviewer what life was like at the retreat, and their reasons for returning to England. By April 12th, John and George had also gotten their fill of the Maharishi; John beat a hasty retreat to London, while George stayed in India, visiting Madras.
Posted by DinsdaleP at 4:01 PM