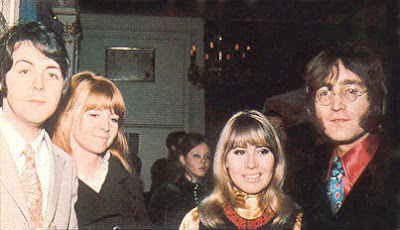 With Apple in its embryonic stages and no group projects in the pipeline, 1968 began on a quiet note for the Beatles.
On January 7th, George flew to India to record at EMI's Bombay studios. Most of the material was for the Wonderwall film score, but he also produced the basic tracks for "The Inner Light" there on January 12th.
Apple's first headquarters officially opened at 95 Wigmore Street on January 22nd; three days earlier, the Beatles had attended a launch party there for Apple Publishing's first signing, Grapefruit.
Later that week, they gathered at Twickenham Studios to film their closing cameo appearance in Yellow Submarine:
On January 27th, Kenny Everett visited Kenwood to record an interview with John for his BBC Radio 1 series, The Kenny Everett Show (broadcast February 4th).
Posted by DinsdaleP at 1:05 PM