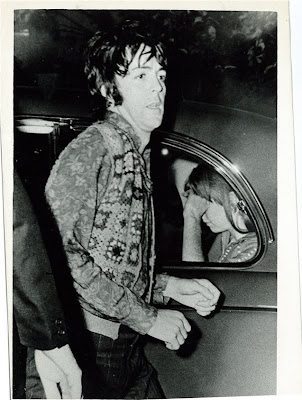 Pattie Harrison had begun studying Transcendental Meditation in 1967, so it was natural that she would encourage her husband to attend a lecture on the topic at the London Hilton by Maharishi Mahesh Yogi. George rounded up John and Paul for the August 24th event (Ringo was busy attending to his wife and newborn son, Jason).
After meeting the guru backstage, the Beatles readily agreed to drop everything and participate in the Maharishi's week-long TM conference in Wales. The next day, the Maharishi spoke to a reporter at Euston Station in London before he and all four Beatles boarded a train bound for Bangor.
They barely had time to settle into a routine at Normal College before harsh reality intruded: on the morning of August 27th, Brian Epstein was found dead in his bedroom of an apparent drug overdose. Paul and Jane Asher took the next available train back to London, while his bandmates spoke to reporters from ITV and BBC News about their feelings.
Posted by DinsdaleP at 2:22 PM