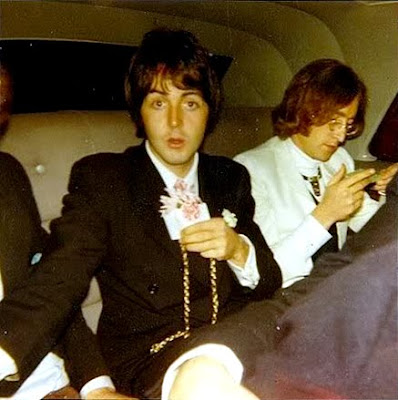 The Lennon-McCartney publicity blitz promoting Apple Corps in New York City reached its zenith on May 14th, 1968. The day began with a 1:30 pm press conference at the Americana Hotel.
John and Paul then taped an interview for the local public TV station, WNDT, chatting with Mitchell Krause for Newsfront. The awkward and mostly unrevealing discussion was broadcast the following night, but only survives as an off-air audio recording.
Likewise the duo's appearance that evening on NBC's The Tonight Show, the master tape of which was erased along with most of Johnny Carson's first ten years as host. Carson wasn't even in town that night, so baseball announcer Joe Garagiola did his best to fill in as guest host; actress Tallulah Bankhead livened up the proceedings somewhat.
Posted by DinsdaleP at 4:00 PM