So Little Time, So Much To Know! 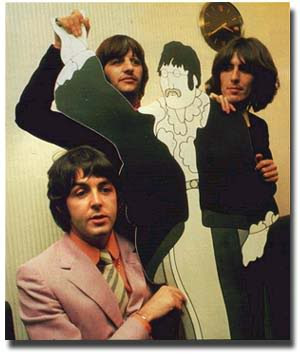 By June 26th, 1968, all four Beatles were together again in EMI Studios recording their new album. The first two weeks of sessions concentrated on "Everybody's Got Something To Hide Except Me And My Monkey", "Good Night", and "Ob-La-Di, Ob-La-Da".

Spare days saw them assisting other Apple artists, as Paul produced "Those Were The Days" for Mary Hopkin and George (with help from Paul and Ringo) worked on "Sour Milk Sea" with Jackie Lomax. On June 30th, Paul recorded the Black Dyke Mills Band performing "Thingumybob" and "Yellow Submarine".

A press preview of the animated film Yellow Submarine was held July 8th at the Bowater House Cinema in London. For some reason, John and Yoko failed to show up, but the other three were there to chat with reporters from ITV News and other outlets. All four Beatles did attend the movie's public premiere on July 17th at the London Pavilion, an event captured on camera for BBC1's How It Is.

Posted by DinsdaleP at 3:21 PM