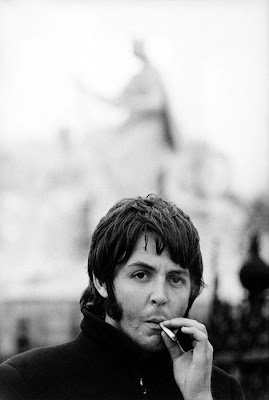 The two weeks between John and Paul's return from America on May 16th, 1968 and the start of the "White Album" sessions on May 30th were a busy time for the Beatles.
A few days after returning to Kenwood, with his wife away in Greece, John invited Yoko Ono over; they broke the ice by recording Unfinished Music No. 1: Two Virgins. George and Ringo were at the Cannes Film Festival attending the premiere of Wonderwall. They returned on the 19th, just in time to attend a housewarming party thrown by playwright Harold Pinter.
On the 21st, Paul and Jane Asher attended an Andy Williams concert at the Royal Albert Hall; on the 22nd, John and George attended a luncheon to launch Apple Tailoring, the company's second London boutique. On the 23rd, Paul and Ringo were filmed at EMI Studios for Tony Palmer's TV documentary about the British rock scene, All My Loving. It was aired on BBC's Omnibus series November 3rd.
May 26th found Paul at Kensington Gardens directing a promotional film clip for Apple Publishing artists Grapefruit's new single, "Elevator". Somehow, during all this activity, the group found time to record close to 30 demos of songs for their next album, mostly composed in Rishikesh.
Finally, here are a couple of promos for Toronto radio station CHUM-FM, recorded by Paul on an unknown date circa 1968.
Posted by DinsdaleP at 3:38 PM