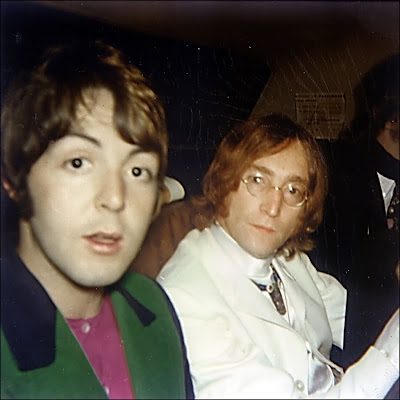 With India seemingly in their rear-view mirrors, it was time for the Beatles to concentrate on their new business venture, Apple Corps. Apple Tailoring and Publishing were already established, and the record label would soon follow, along with Apple Films, Electronics, and a whole host of ideas that never made it off the ground. Now it was time to emblazon the company's name into America's consciousness.
Accompanied by Derek Taylor, Mal Evans, and Neil Aspinall, John and Paul flew to New York City on May 11th, 1968 for a press blitz unparalleled since their touring days. Many of the interviews were conducted out of the St. Regis Hotel on May 13th, most notably a filmed chat with their erstwhile touring companion, Larry Kane.
Posted by DinsdaleP at 3:16 PM