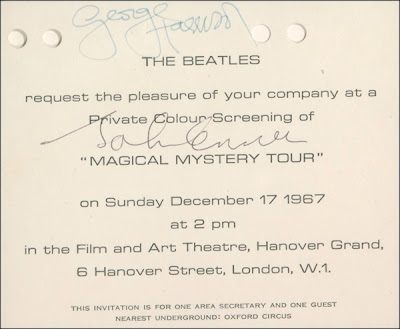 1967 ended on a disappointing note for the Beatles. Magical Mystery Tour was released as an LP (by Capitol in North America) on November 27th, and as a double EP (by Parlophone in the UK) on December 8th.
Along with the single "Hello Goodbye", the new music was well-enough received, but the TV film would have a different fate. It was previewed for the Beatles Fan Club Area Secretaries on December 17th (attended by John and George, as Ringo was returning from filming Candy in Rome and Paul was away in Scotland).
All four Beatles threw a fancy dress party on the 21st to officially launch the film, but the initial broadcast on BBC-1 (in black and white) on Boxing Day was a critical disaster. So negative were the reviews that Paul agreed to appear on Rediffusion-TV's The Frost Programme the very next evening, where he defended the project to David Frost as a noble failure.
Posted by DinsdaleP at 3:04 PM