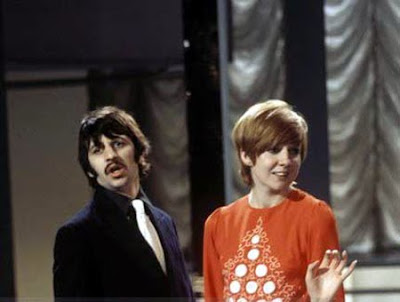 On February 6th, 1968, Ringo stepped into the spotlight without his bandmates by making a solo appearance on British TV. Along with Spike Milligan and Peter Brough, he was one of Cilla Black's special guests on her new TV variety series, Cilla, which aired live on BBC1.
Unfortunately, no film or videotape copy seems to exist of the broadcast, but a home-taped audio recording has survived. Ringo appeared in three segments:
- Helping Cilla read viewer mail
- Acting as a ventriloquist, with Cilla as his dummy, and singing "Nellie Dean"
- Duetting and dancing with Cilla on the oldie "Do You Like Me?"
Posted by DinsdaleP at 2:21 PM