These Youngsters From Liverpool 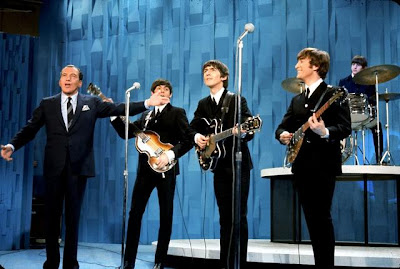 February 9th, 1964 was perhaps the most important day in The Beatles' career. But apart from their triumphant performance on The Ed Sullivan Show, how else did they spend the day?
After an afternoon dress rehearsal (including three songs taped for later broadcast), they unwound in their suite at the Plaza Hotel. Or tried to unwind, as disc jockey Murray the "K" Kaufman was in their faces relaying events to the metropolitan New York area via WINS-AM:
Wacker the "K"
On the way into CBS Studio 50 for the pivotal live broadcast, they were stopped by a CBS News reporter for a few words:
White Christmas
After the show, Washington DC disc jockey Carroll James lurked backstage and briefly interviewed Dizzy Gillespie and George for WWDC-AM before CBS security put the kibosh on things:
Good ol' Dizzy!
The post-show celebrating continued late into the night at the Peppermint Lounge, where Murray and Ringo danced to the house band, as the Maysles brothers' camera captured the action. At 4 A.M., the camera was rolling as Paul and Murray said goodnight in front of the Plaza:
By gum, Murray!
Posted by DinsdaleP at 8:56 PM