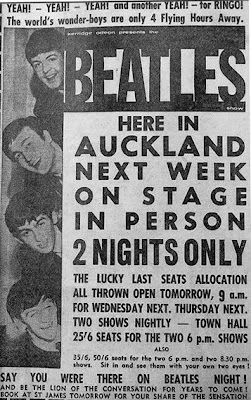 The Beatles' only visit to New Zealand took place in late June, 1964, towards the end of their Australasian tour. After performing in Wellington, they flew to Auckland for concerts on the 24th and 25th at the Town Hall.
Following a press conference at Auckland's Royal International Hotel on the 25th, Sydney DJ Bob Rogers chatted with Paul, John, and Ringo. The next day, he recorded a long and often hilarious conversation with all four Beatles in their suite at the New City Hotel in Dunedin.
Edited versions of both interviews appeared on the 1981 LP The Beatles Talk Downunder, but longer tapes were bootlegged on the LP Fuck! in 1988. Here are composite recordings using both sources:
Auckland
Dunedin
Posted by DinsdaleP at 1:08 PM