Misunderstanding All You See 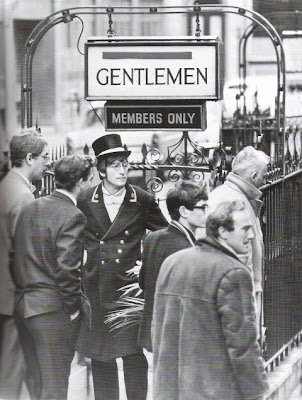 Road-weary and shell-shocked after a harrowing summer of worldwide touring and controversy, the Beatles retreated to individual pursuits from September through November, 1966.
John Lennon flew to West Germany on September 5th, had his moptop cropped, and began filming How I Won The War under Richard Lester's familiar direction. John returned to London September 14th, the same day George and Pattie Harrison left for Bombay. They would spend the next five weeks in India, where George would receive sitar tutelage from Ravi Shankar.
On September 18th, John flew to Almeria, Spain, for a more extended location shoot for How I Won The War. While there, he composed "Strawberry Fields Forever", welcomed a visit from Ringo and Maureen Starkey, and gave a lengthy interview to Fred Robbins.
Paul McCartney busied himself composing music for the film The Family Way, arranging and recording the score with George Martin's assistance. He then took a sightseeing trip with Mal Evans to France and Spain, arriving a few days too late to meet up with John, whose part had wrapped on November 6th. Paul and Mal then spent a week on safari in Kenya, finally returning to London November 19th.
All of these separate activities caused rampant speculation in the press that the Beatles were on the verge of breaking up. Brian Epstein denied these rumors at every occasion - to Dieter Broer in September, during a German press conference for John's film, and again to Reuters on November 8th. But privately, Brian was terrified that the Beatles no longer needed him; after overdosing on pills, he checked himself into a clinic on September 27th to recuperate.
Meanwhile, John Lennon's life was about to take a sharp left turn, after his meeting with avant-garde artist Yoko Ono at the Indica Gallery on November 9th. His performance as a doorman on the Dudley Moore/Peter Cook TV sketch show Not Only... But Also, filmed November 27th, was the last public appearance of "Beatle John".
Posted by DinsdaleP at 10:19 AM