When The Rain Comes 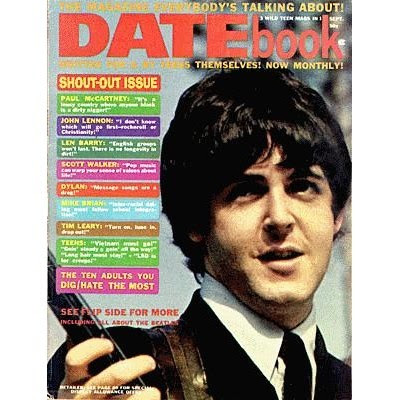 During their month off in July 1966, the Beatles tried to put the horrors of Manila behind them and recoup their energy for another American tour. George continued to practice the sitar, and visited his new in-laws. Paul appeared on BBC Radio with David Frost, and he and John sat down with Keith Fordyce to explore their songwriting partnership.
Meanwhile in the States, radio stations were ramping up the hype machine yet again for the impending tour. WTRY in Albany held a contest to send fans to Shea Stadium, and KBTR in Denver sponsored a trip to the St. Louis concert.
On July 29th, a John Lennon quote on the cover of Datebook magazine set off a series of events that had the potential to make Manila look like a polite misunderstanding.
Posted by DinsdaleP at 3:03 PM