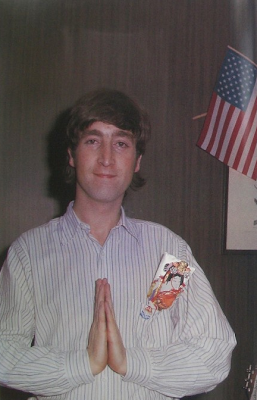 The Beatles' final tour kicked off with a pair of concerts at the Chicago International Amphitheater on August 12th, 1966. Media coverage was understandably high at this show, with John's "apology" fresh in the news.
Local station WCFL broadcast live coverage from the venue, and WCFL disc jockey Jim Stagg teamed up with Bess Coleman to interview the Beatles between shows. Coleman was the band's American press officer, and would file reports for radio syndication as well as Teen Life magazine throughout the tour. Also chatting with the group between concerts was Ken Douglas, a British DJ working in Louisville, Kentucky.
Standing beside Douglas as he interviewed Paul was Kenny Everett, another British DJ who was covering the tour for the pirate station Radio London. Kenny spoke with fans in the audience, and filed this report on the first day's events. Not to be outdone, rival pirate station Radio Caroline had Jerry "Super" Leighton following the tour, and his secondhand reporting was used to compile a news bulletin on the Chicago date.
Posted by DinsdaleP at 1:47 PM