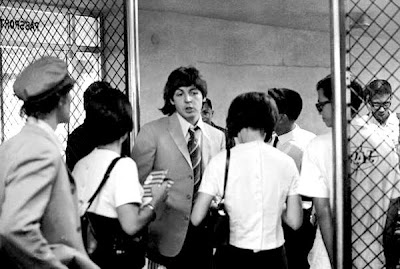 On July 4th, 1966, The Beatles played to their largest-ever single day crowds (80,000 total) in two performances at Manila's Rizal Memorial Football Stadium. The accomplishment was quickly spoiled by events at the Presidential Palace:
"On July 3rd, the day prior to the show, The Manila Sunday Times reported that the Beatles were invited to join the President and Mrs. Marcos (with their 3 children) to their Malacañang Palace at 11am. The Beatles knew nothing of this appointment, hearing only of a request for a short "pop-in" at the palace at 4pm which they respectfully declined due to the fact that their first show started at 4pm! The Beatles claimed they never received the earlier 11am invitation.
Much to the Beatles' surprise, the palatial tyrants were extremely angered at the Beatles neglect and the morning after the concert, The Manila Times ran the headline "Imelda Stood Up!!". The ramifications were to become serious. Philippine promoter Ramon Ramos refused to pay the Beatles for their performance! Bomb and death threats were telephoned to the deluged British Embassy and to the boys hotel suite. Brian Epstein was so distressed with the situation he arranged for a press conference from the hotel to apologize for the misunderstanding. BUT... as fate would have it, some unforeseen static blipped out his interview from most all TV screens in the country! (more than a few thought it was probably more shenanigans by the Marcos clan).
Pulling more strings the next day when the Beatles were scheduled to depart the country, Misael Vera, Philippine Tax Authority, insisted the group could not leave the country until every penny of the taxes owed them was paid! Of course, they never got paid anything but Brian hurriedly forked over a bond out his own funds for P.74,450 (around $18,000) to settle the matter.
To make matters worse, all security detail assigned to the boys were withdrawn leaving them extremely vulnerable. They were literally kicked and jostled as they left their hotel and totally harassed all the way to the airport. Things were no better there where the airport manager has also removed all security for the Beatles. They went so far as to shut down the power to stop the escalators, forcing the boys to scale several flights of stairs with their own luggage, only to face an angry mob of 200 Filipinos brutally manhandling them! Ringo was literally floored by an uppercut and kicked on the ground. He suffered a sprained ankle as well and had to be helped to the customs area. Mal Evans and Brian Epstein were injured as well. Alf Bicknell suffered a cracked rib and a spinal injury.
When they finally approached the plane, a large booing crowd jeered and mocked them chanting "Beatles Alis Dayan!" (Go Home Beatles!) Once in the plane, some scraping government officials "decided" the Beatles were NOT authorized to leave the country due to inaccurate "check in" procedures days earlier... This led to another 40 minute wait on the tarmac while Mal & Tony Barrow went back to the terminal to clean up the necessary paperwork. Only minutes after the Beatles angrily departed, did the press run a statement by President Marcos stating "There was no intention on the part of the Beatles to slight the first lady or the government of the Republic Of The Philippines". Obviously a bit too late to do the Beatles any good."
Source: http://www.rarebeatles.com/photopg7/nonusa/php7466.htm
Bewildered and extremely embittered, the Beatles cooled their jets in New Delhi for a couple of days before finally returning to London Airport early on July 8th. There, they explained their side of the imbroglio to ITV News reporter John Edwards and an interviewer for Reuters.
Posted by DinsdaleP at 4:41 PM