I'm Not A Beatle Anymore 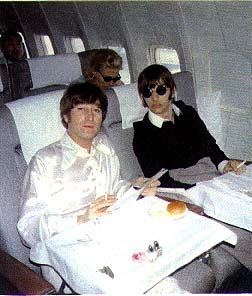 The Beatles' concert career came shrieking to a halt in San Francisco just before 10pm on August 29th, 1966, as the group roared through "Long Tall Sally" one final time.
KYA radio plugged the performance, with no hint that it was anything other than "the last show of their biggest American tour". Nor did fans at Candlestick Park sense anything historic about the occasion. John, George, and Ringo gave no clues when speaking to WTRY's Lee Darling backstage.
But when they boarded a flight back to London on August 30th, George Harrison declared to nobody in particular, "Well, that's it. I'm no longer a Beatle". When they landed on the 31st, their only declaration was that it was time to rest, but the Beatles would never set off on tour again.
Posted by DinsdaleP at 3:18 PM