As Bad As The Monkees 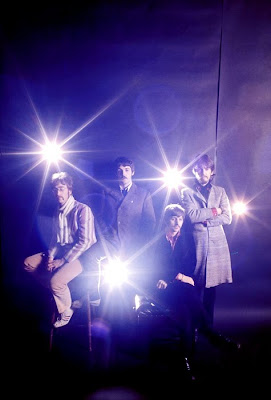 Being ensconced in EMI Studios throughout the first three months of 1967, the Beatles made few public appearances and gave few media interviews, apart from Paul's appearance in a Granada TV documentary.
An early clue to the new direction surfaced February 13th (in the US; February 17th in the UK) with the release of the single "Strawberry Fields Forever"/"Penny Lane". The recordings, together with the picture sleeve photo and psychedelic promotional films, represented a radical new sound and look for the Beatles.
Kenny Everett played an advance copy of the single on Radio London on February 4th, and fell instantly in love with "Strawberry Fields Forever". US teenagers were less convinced when viewing the promo clips on American Bandstand March 11th.
Capitol's promotional copies of the single sent to disc jockeys in the US and Canada used an early mix of "Penny Lane", highlighted by a seven-note piccolo trumpet coda. This version was commonly heard on the radio well after the single's release, as this March 26th aircheck on WFOM in Marietta, Georgia proves. During a trip to New York City in March, Brian Epstein explained to Murray the "K" that it was Paul's perfectionism which caused the last-minute switch.
Posted by DinsdaleP at 2:39 PM