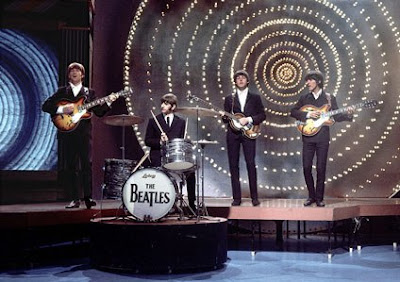 The Beatles spent the first half of June, 1966 ensconced in EMI Studios finishing up the Revolver LP. On the 16th, they made a surprise live TV appearance on Top Of The Pops, miming both sides of their new single (as with most of their TOTP performances, the videotape no longer exists).
Meanwhile in the States, Capitol was recalling thousands of copies of the "Yesterday"... and Today LP, to replace (or paste-over) the offending "Butcher" cover photo. Press officer Tony Barrow spoke about the controversy with Cleveland DJ Jerry G. Bishop.
Recording for Revolver was wrapped up on June 21st, and after a single day off, the Beatles flew to West Germany to begin their final World Tour. The first stop was Munich, for two concerts on the 24th, followed by a pair of shows in Essen the next day.
In Essen, they held a press conference between shows, and spoke to a reporter from WDR Radio as well as Camie McKay of Radio Canadian Army Europe.
Posted by DinsdaleP at 2:37 PM