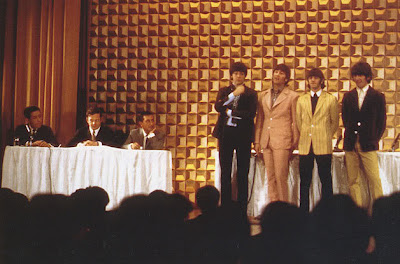 As noted in a previous blog post, the Beatles' June 26th, 1966 Hamburg press conference was a contentious affair, although the concerts and reunions with old friends went off well.
But the tour was fated to go from bad to worse to nightmare. Flying out of Hamburg on the afternoon of the 27th , the band were due to fly via London to Tokyo for a couple days of rest before their Budokan concerts. Mother Nature had other ideas, and a typhoon rerouted their flight to Anchorage, Alaska for an unscheduled overnight stay.
They finally arrived in Tokyo around 3:30 am on the 30th. Their plane-weary and jet lagged bodies grabbed some sleep in their Hilton Hotel suite before emerging for a TV interview mid-afternoon. This was followed by a press conference which dragged on for twice as long as usual due to the lengthy translation (and re-translation) process.
The Beatles' three-night stand at the Budokan had drawn protests from traditionalists offended at the use of a martial arts arena for a Western rock spectacle. The first two shows were videotaped for Japanese TV, preserving for eternity the dreadful state of their sloppy and unenthusiastic performing efforts:
All things considered, the Beatles were probably glad to put Japan behind them and head to Manila, the last stop on the tour... Whoops!
Posted by DinsdaleP at 3:01 PM