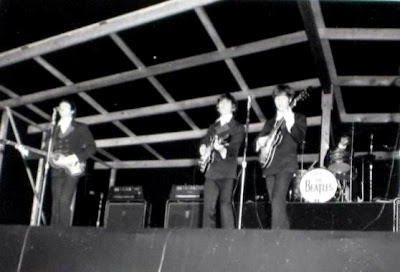 The Beatles' August 18th, 1966 concert at Suffolk Downs in Boston was highlighted by a fan jumping onstage during "Long Tall Sally", a moment captured by Kenny Everett.
Elsewhere, Jim Stagg got a few words from George as he deplaned at Logan Airport, and talked with Paul and George at the Somerset Hotel. Bess Coleman had lengthy chats with each Beatle at the hotel, and filed another brief tour report describing the previous day's Toronto concerts.
Posted by DinsdaleP at 12:48 PM