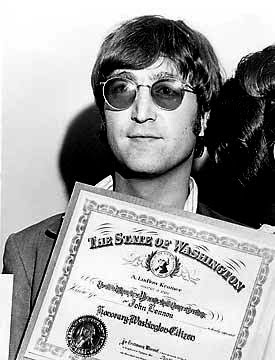 The Beatles flew to Seattle on August 25th, 1966, for two concerts at the Seattle Coliseum. Vancouver's CFUN radio kept fans abreast of the ticket sales and a rumor that Paul would be marrying Jane Asher that very day. A local TV reporter grabbed a few words from Ringo as he deplaned at Sea-Tac Airport.
Between concerts, Dusty Adams interviewed all four Fabs backstage, and a press conference (most likely the final ever held by the group on tour) occurred just prior to the second show. Rather than staying in Seattle, The Beatles flew back to Los Angeles immediately after the last concert.
Posted by DinsdaleP at 3:47 PM