Nothing To Shea But It's OK 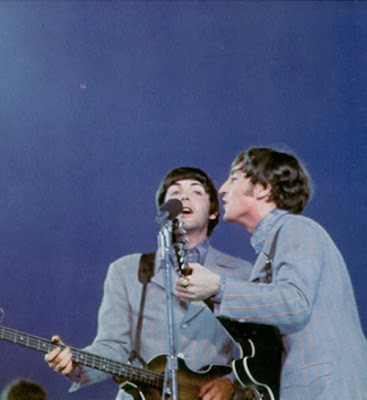 The Beatles' final concert in New York would be at Shea Stadium, but compared to the previous year's record-setting sellout, the 1966 performance was only about 80% full.
The group arrived at LaGuardia Airport on August 22nd, flying direct from St. Louis and landing around 3:50 in the morning. As they slept into the afternoon at the Warwick Hotel, an Associated Press reporter interviewed a devoted fan outside.
The Beatles eventually emerged for an early evening press conference, followed by a special "junior" press conference, with contest-winning fans asking the questions, which were both more interesting and more inane than those posed by the "real" journalists. They also spoke with "Cousin" Bruce Morrow live on WABC radio following the two conferences. That night, Brian Epstein appeared on NBC's Tonight Show, with guest host Hugh Downs filling in for Johnny Carson.
On the 23rd, George chatted with Kenny Everett prior to the concert at Shea. Covering the concert were a somewhat cynical Leonard Harris from WCBS-TV and an enterprising reporter for the Audio Journal company, who released an audio-verite souvenir LP called Beatles at Shea Stadium Described by Erupting Fans.
Posted by DinsdaleP at 2:40 PM