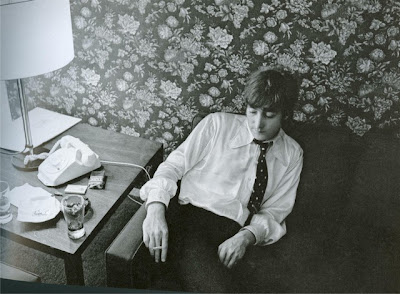 August 11th, 1966 was John Lennon's day of reckoning. Even before the Beatles boarded their flight to America, a BBC-TV reporter at London Airport tried to gauge John's state of mind about what might lie ahead. As soon as John stepped off the plane at Chicago's O'Hare Airport, American journalists tried to get a scoop by shouting questions across the tarmac.
Upon arrival at the Astor Towers Hotel, John had only an hour or two to gather his thoughts (and shed some stressful tears) before his moment of reckoning. Tony Barrow had arranged to ease the group into the limelight by scheduling two press conferences; the first was for local newspapers and various DJs and reporters covering the whole tour, with no national media or moving picture cameras present. The full 17-minute audio recording captures John's repeated attempts to clarify or explain his remark, culminating in a halfhearted apology to Tommy Charles.
The second press conference was held in front of cameras from the major TV networks as well as newsreel film crews from around the globe. The more well-known soundbites originate from this conference, which doesn't seem to exist in a continuous state. Here is a 5-minute composite from several sources.
Posted by DinsdaleP at 1:26 PM