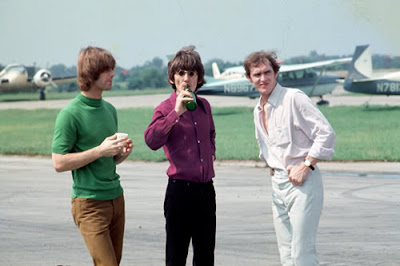 Heavy downpours and a lack of protection over the stage cancelled The Beatles' scheduled concert in Cincinnati on August 20th, 1966, forcing them to "play" a doubleheader in two cities the following day.
They began in the afternoon with the rain check show at Crosley Field in Cincinnati, then flew to St. Louis for another rainy show (this time under a canopy) at Busch Stadium. Bess Coleman kept the fans up to date with on-the-spot reports from both Cincinnati and St. Louis.
St. Louis was disc jockey Ken Douglas's final stop on the tour; here are some of his undated Beatle interviews and a quick chat with Brian Epstein. The Beatles' next stop would be New York City, where WMCA-AM had been cranking up the hype machine as usual all week long.
Posted by DinsdaleP at 3:52 PM