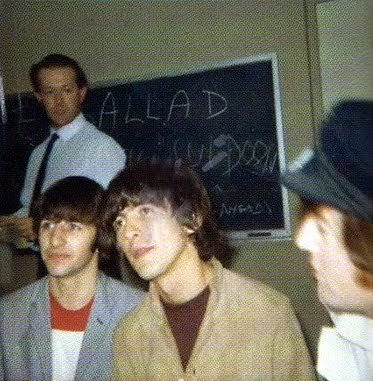 The Beatles played two shows at Memorial Coliseum in Portland, Oregon on August 22nd, 1965. The flight there from Minneapolis was terrifying, as an engine caught fire shortly before landing. Immediately afterwards, they had to answer inane questions at an airport press conference.
Between shows, they relaxed backstage, socializing with Carl Wilson and Mike Love of the Beach Boys, and chatted with disc jockey Jerry G. Bishop. John's throat was still in poor shape, but would heal over the subsequent five-day break in Los Angeles.