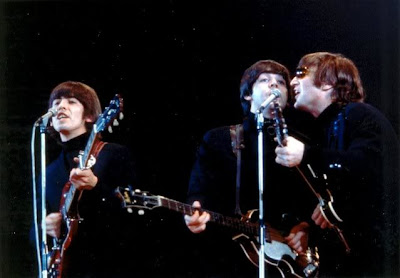 After spending most of April inside EMI's Abbey Road Studios recording a new single and tracks for Revolver, the Beatles made their first public appearance of 1966 on May 1st, headlining the annual New Musical Express Poll Winners' Concert at the Empire Pool, Wembley. The mind-bogging lineup of performers included the Rolling Stones, the Who, the Spencer Davis Group, Roy Orbison, the Yardbirds, Dusty Springfield, the Small Faces, and Cliff Richard and the Shadows, among others.
It also turned out to be their final performance before a paying audience in their home country, albeit a truncated set: "I Feel Fine", "Nowhere Man", "Day Tripper", "If I Needed Someone" (seen above), and "I'm Down". Unfortunately, ABC-TV's cameras were shut off during the Beatles' numbers, due to contractual issues. But they were filmed receiving their awards at the end of the event:
Posted by DinsdaleP at 4:46 PM