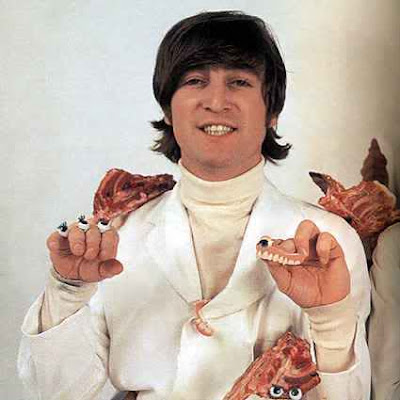 March 25th, 1966 was a bizarre day for the Beatles. They had attended the premiere of Alfie the previous night, a film in which Jane Asher had a small role. That may have been the first time in 1966 all four Beatles were together, apart from a January 5th overdubbing session for the Shea Stadium concert film.
Their first business-related task of the year was a photo session in Chelsea the following day. Robert Whitaker shot a series of surrealistic photos, most notoriously the "butcher" images, one of which ended up briefly on the cover of Capitol's "Yesterday"... And Today LP.
A less welcome task that day was an interview with Tom Lodge, disc jockey for the pirate station Radio Caroline. Lodge managed to record 21 minutes of material with the group, ostensibly for use on a flexi-disc to promote the new Disc and Music Echo music paper. Unfortunately, the group was in no mood to cooperate, and the "witty banter" was beyond forced, with less than two minutes being usable.
Posted by DinsdaleP at 2:02 PM