It's Ten O'clock On A Saturday! 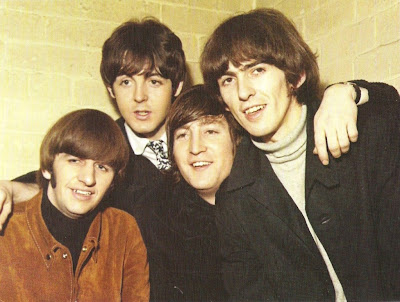 The final Rubber Soul session stretched into the early morning of November 12th, 1965. From then until their final UK tour kicked off on December 3rd, the Beatles had few commitments.
On November 23rd, they spent the day at Twickenham Film Studios videotaping promotional clips for both sides of their new single, "Day Tripper" and "We Can Work It Out", along with their three prior A-sides.
On the 29th, they sat down with Brian Matthew for a chat-only appearance on BBC Radio's Saturday Club, to be broadcast on Christmas day. The uncut tape of this recording was discovered in 1988, and portions have been aired in various BBC retrospectives since then.
The following day, Matthew also interviewed George and John in-depth for Pop Profile.
Posted by DinsdaleP at 1:23 PM