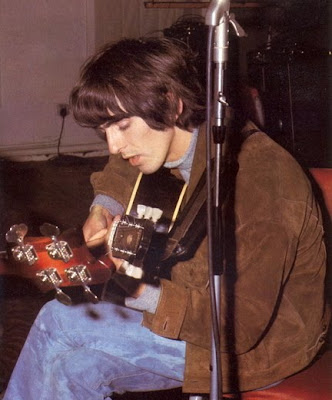 By November, 1965, deadlines for Rubber Soul and the annual Fan Club Christmas flexi were imminent. After an aborted attempt at the latter in October, George Martin and the Beatles decided to kill two birds with one stone.
On the 8th, they recorded George Harrison's second contribution to the LP, "Think For Yourself". During the vocal overdub portion of the session, Martin rolled a separate tape to capture the group's rehearsal, banter, and bad jokes, hoping to capture some spontaneous magic for the Christmas flexi.
None of the nineteen minutes recorded proved useful, apart from a few seconds exhumed in 1967-8 for the Yellow Submarine film soundtrack. The finished message was edited together from three takes of speech and singing, taped after "Think For Yourself" had been completed. Earlier this year, an Arena profile of George Martin provided a brief outtake from one of these takes.