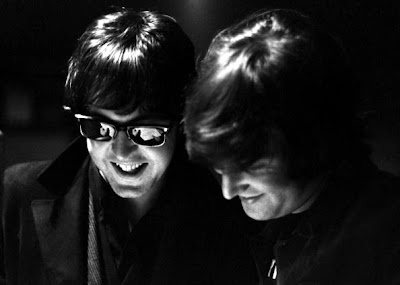 Apart from composing material for their next LP and single, the Beatles had little to do in September, 1965. Ringo did get to greet his first child, Zak, into the world on the 13th, and the group made a quick visit back to Liverpool.
Sessions for Rubber Soul began back at EMI Studios in October 12th. In addition to having a new album and single out for the holidays, publicist Tony Barrow was insisting upon another "Christmas Message" flexi-disc specifically for members of the Beatles Fan Club. To this end, a session was held at London's Marquee Studio on October 19th.
As the surviving 25-minute recording attests, the atmosphere was miserable. George was absent, John hated Barrow's script, and Paul was unable to rally the others into a spirited performance. Things only picked up towards the end of the evening when they ad-libbed around a piano. None of this session was used, and the flexi-disc material would be recorded under George Martin's supervision at Abbey Road in November.
Posted by DinsdaleP at 2:26 PM