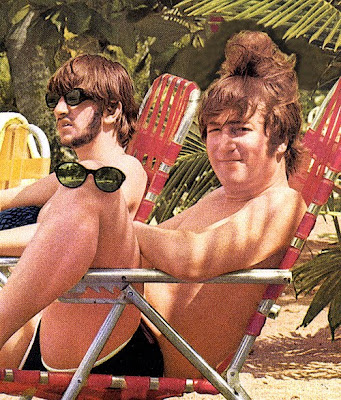 From the moment they stepped offstage at Cardiff on December 12th, 1965, until they convened at EMI Studios on April 6th, 1966, the Beatles enjoyed the longest stretch of free time since their rise to fame. Other than writing new songs and the occasional photo session, they had no group commitments.
Brian Epstein began 1966 with a business trip to New York City, and on January 8th, he spoke via telephone with Bruce Bradley of Boston's WBZ-AM, keeping Americans up to date on the Beatles' plans for the new year.
John and Ringo, accompanied by their wives, flew to Trinidad on January 12th for a winter holiday in the sun, returning on the 23rd. This meant they missed out on George's January 21st wedding to Patricia Boyd; the newlyweds would honeymoon in Barbados beginning February 8th.
Sometime that winter, George recorded a brief message for Bravo, a German magazine that would be sponsoring the Beatles' tour in June. The recording was included on a flexi-disc with the March 21st issue of Bravo.
Posted by DinsdaleP at 12:42 PM