Jerk With A Badge 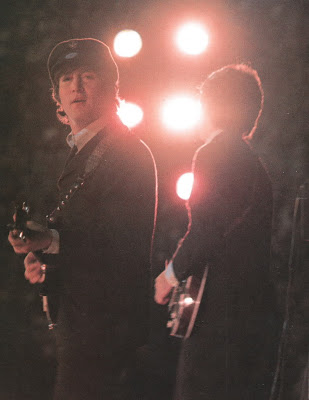 The Beatles' sole trip to Minneapolis on August 21st, 1965, started on a high note and rapidly went downhill.

Upon their late-afternoon arrival, they held a press conference at the venue, Metropolitan Stadium. Much to his delight and John's envy, George was presented with a brand-new 12-string Rickenbacker guitar at the end of the conference. The proceedings were broadcast live on WDGY radio, and filmed for local TV news.

During the concert, the usual opening number, "Twist And Shout", was cut from the setlist due to the rough state of John's throat. After the show, police enforced a midnight curfew at the Leamington Motor Inn, in particular evicting a girl from Paul's room, much to his dismay. Inspector Donald R. Dwyer was interviewed about the incident a couple of days later.

Posted by DinsdaleP at 2:25 PM