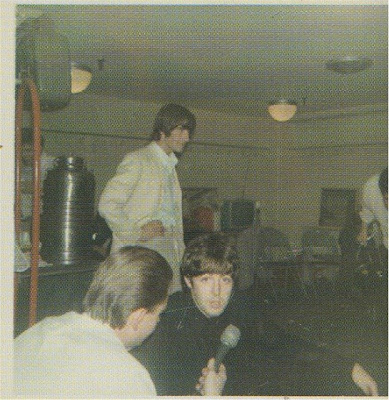 Cleveland disc jockey Jerry G. Bishop (real name Jerry Ghan) toured with the Beatles on their entire August 1965 North American tour, interviewing them in-depth at most stops. His recordings were compiled on an LP considered for release on Capitol in 1966, which only made it as far as the acetate stage.
In the early 1980s, two picture disc albums of Jerry's interviews were issued; unfortunately most of the material is difficult to pin down to any specific date, but here is a 41-minute composite of all the undated material presumed to be from 1965.
Another reporter who asked intelligent questions was newsman Larry Kane, and he supplied interview tapes for the TV special The Beatles At Shea Stadium. The recordings date from both the 1964 and 1965 tours, and can be heard over documentary footage of the concert.
Posted by DinsdaleP at 2:49 PM