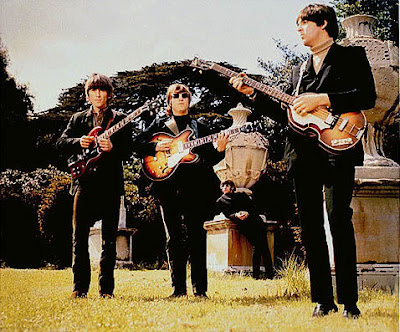 Rather than make the usual rounds of pop music TV shows to plug the "Paperback Writer"/"Rain" single, the Beatles opted to film a series of promotional clips of both songs for worldwide distribution.
On May 19th, 1966, they videotaped at least seven clips inside EMI Studio 1, as well as a special greeting to Ed Sullivan, whose show would air two of them in color on June 5th. The following day, they spent the morning at Chiswick House and Gardens, filming more promos for both songs, to be broadcast on Top Of The Pops in the UK.
The Beatles had the next five days off, meeting up again on the 26th to tape the basic tracks for a new song, "Yellow Submarine". After the session ended at 1am, John apparently stayed up all night at his home in Weybridge indulging in certain substances with Bob Dylan, who was in London to perform at the Royal Albert Hall.
By 7am, it was time for the party to end, and John and Bob were driven to the Mayfair Hotel where Dylan was staying. Also in the limo was filmmaker D. A. Pennebaker, who was shooting a documentary on the tour. The result was 20 minutes of footage showing Lennon and Dylan at their least inspired, with the latter growing increasingly ill as the limo approaches the hotel. Only a very brief portion of the footage was used in the completed film, Eat The Document.
Posted by DinsdaleP at 10:47 AM