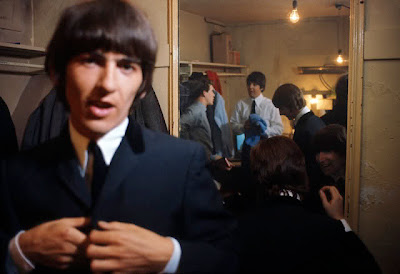 The Beatles wrapped up July, 1964 with a visit to Stockholm, Sweden, and began August with a couple of concerts in Bournemouth and Scarborough.
On August 10th, ITV sent a news crew to Ipswich, where fans were queued outside the Gaumont Cinema. Tickets went on sale that day for an October 30th concert, part of the group's extensive Autumn Tour of the UK.
But before that tour, The Beatles had a long trip to North America in store. The marathon jaunt began August 18th, as they flew from London Airport all the way west to Winnipeg, Manitoba. The brief stop was merely for refueling before continuing on to California, but thousands of fans showed up to welcome the group to Canada, and TV reporter Bob Burns covered the event for local Channel 7 news.
Posted by DinsdaleP at 1:48 PM