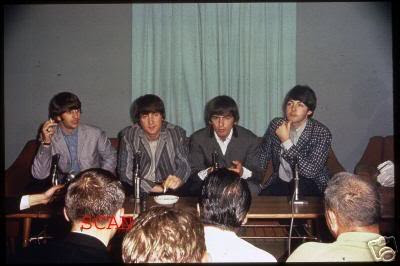 August 22nd, 1964 saw the first Beatles concert in Canada, as they played one show at Vancouver's Empire Stadium that evening. Local station CKNW covered the group's visit extensively, beginning with the pre-show press conference and then broadcasting live from the concert.
Another radio station, CKWX, reported from the conference and the concert, including snatches of the opening acts. As the coverage illustrates, the crowd was completely out of control, and despite two interruptions (warnings from MC Red Robinson and press agent Derek Taylor), several fans were injured in the crush.
In the calm before the storm, Larry Kane interviewed Paul and George backstage prior to the show, and Paul taped a couple of promos for Peter and Gordon and Cilla Black's latest singles (both, not coincidentally, written by Lennon and McCartney).
Posted by DinsdaleP at 4:39 PM