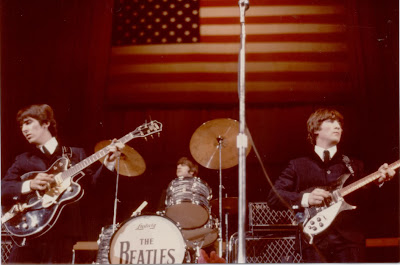 The tour kicked off August 19th with a concert at the Cow Palace in Daly City, just south of San Francisco. KCRA-TV filmed some of the show for a half-hour special; earlier in the day, they had interviewed fans at the Hilton Hotel. Also on the scene at the hotel was Jim Stagg, DJ for Cleveland's KYW-AM.
Meanwhile, inside the hotel, Paul and George sat for a taped interview with Hillard "Hilly" Rose of KCBS-AM radio. In 2008, Rose recalled the circumstances:
"I can only tell you that they held a press conference the evening of their arrival, and the recording was done the following day in their hotel suite at the Hilton. Many hotels would not house them because of the unruly crowds, but the Hilton was so large with so many entrances it worked for both parties. The story behind the interview is that they were NOT giving interviews. I was working for KCBS and felt it was worth the try. I phoned their tour manager at the Hilton. I am sure it helped that I was with KCBS and they felt beholden to Ed Sullivan for their great welcome on his program.
At least the tour manager was willing to listen to my pitch, which was that with all the unruly crowds at the concerts it was beginning not to be safe. I wanted the Beatles to do an interview telling the youngsters the Beatles wanted them to calm down and make it safe for others. He told me to hang on, which I did for forty minutes. He came back on the line and said incredulously, "You're still there?" He thought surely I would have hung up by then, but I had made the contact and I wasn't going to let go.
He told me to hang on a couple of minutes and I heard him phoning the Fab Four in their suite. He had to cajole them saying, "Yes, this is really important. Yes, I want you to do this." When he came back on the line to me, I got a room number, a time, and a special knock to use on the door.
I showed up at the appointed time, which I remember was somewhere around 3 PM, and all four were in their underwear lounging around. John and Ringo didn't want to do the interview, but happily Paul and George did. John was so annoyed he went into the bathroom and flushed the toilet continuously attempting to foil the sound. I was using a recorder that was unidirectional and blocked out peripheral sound, so it foiled his efforts as you can tell by the quality of the recording.
When I went outside the Hilton the groupies saw me with a tape recorder and demanded to know if I had seen THEM. With the straightest face I could muster I said "Are you kidding? No way." Otherwise they would have torn my recorder to pieces, and maybe me, too.""
Source: http://www.bayarearadio.org/audio/kcbs/kcbs_hilly-rose-beatles.shtml
Posted by DinsdaleP at 3:34 PM