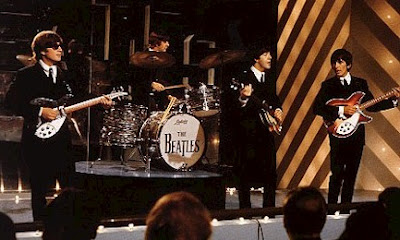 One day in early July, 1964 (most likely the 11th), John Lennon left his bandmates in the lurch, requiring Paul, George, and Ringo to fulfill several promotional commitments on their own.
At the London Hilton, they were interviewed by Dieter Bröer for German radio. Closer to home, the new BBC Radio series Top Gear was set to premiere July 16th, and the Fab Three recorded some promos for their appearance on the first episode.
More significant was a lengthy discussion of A Hard Day's Night, used to promote the film in America on a United Artists open-ended LP to be aired as a half-hour program on US radio. Paul explains that John is absent because he's "gone down to the shipyards to have an estimate for a haircut." By that evening, John had caught up with the group in time to tape a TV appearance on Thank Your Lucky Stars.
Posted by DinsdaleP at 7:33 PM